Last fall, the European start-up news site EU-start-ups listed 50 most influential female start-up entrepreneurs and investors. The only Finnish name on the list was Maria Pennanen, founder of a fintech start-up accelerator in Frankfurt. She has extensive experience in international business management positions and is nowadays an active start-up advisor and private investor. She goes around speaking, especially at conferences on fintech and cryptocurrencies.

She and the Israeli-born Ram Shoham set up an accelerator in Frankfurt in 2016 because it is the center of the banking world. While Berlin, London, and Paris were full of competing accelerators, there were none in Frankfurt, although the city is home to more than 200 banks and the European Central Bank.

“It’s a great place for start-ups who want to sell a new technology to banks and enter the European markets. We help, for instance, Israeli companies in entering the German markets. Finnish companies, such as Bankify and Enterpay, have also been involved,” says Pennanen.

Although there are many finance technology start-ups in Germany, Pennanen is critical of whether the next unicorn that is a start-up that will be worth over a billion will be born there. Germans avoid risks too much.

“Those start-ups aren’t very daring about trying out radically new ideas. In blockchain technology, there is also a lack of clear regulation of what is and what is not allowed. Blockchain technology adaption has been slower than the hype suggested, as regulation is a slowing factor”, says Pennanen.

Job: Co-founder and CEO of Accelerator Frankfurt and private investor.

Education: M.Sc. in Process Engineering at Åbo Akademi University, MBA from ESCP and Purdue University and organizational psychology and change management at INSEAD.

Family: Married, with one child

Initially, Pennanen has an M.Sc. in Process Engineering from Åbo Akademi University, where she majored in paper chemistry and industrial economics. After her thesis, her professor encouraged her to continue towards the doctoral dissertation, but Pennanen first wanted to go abroad. Through the professor’s network, she ended up as a researcher in a Swiss mineral company.

“I soon realized that research is not for me. From Switzerland, I was recruited to a competitor in Denmark, and from there, I moved to the French office of American company Rohm and Haas. I gradually switched more towards sales and marketing,” Pennanen describes her career development.

“I also studied Spanish at the university and took an intensive course in Mexico. The language proved to be useful when I went to work for Botnia (Metsä Fiber) since I needed it in Uruguay, where Botnia built a pulp mill, and I spent the same time in Brazil for business. I moved to China in 2009, but I started studying the language already in 2006 when I was responsible for the Chinese market at Rohm and Haas.” 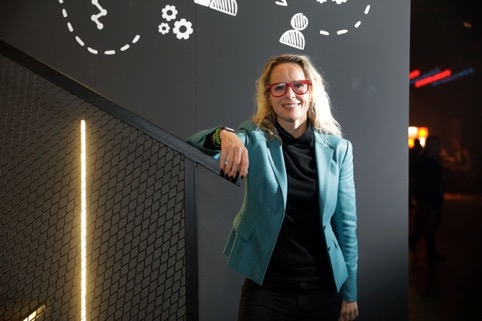 Best sides. “Israeli start-ups dare to try new things, and Germans have an organized way of building processes. When you put them together, something big happens,” Maria Pennanen thinks. OUTI JÄRVINEN

At Botnia, Pennanen was first responsible for the German and French-speaking markets. Then she started being prepared for a more significant role that required experience in Asia. The importance of China to the company had grown.

As the Vice President Sales, Pennanen was responsible for pulp sales to Asia. At that position, she lived in China for three years.

“I learned from Chinese thinking that there is always a solution, but it is not necessarily the most direct way. The Chinese are very systematic in their planning, but they are also opportunists. If the is an opportunity for something, it is done”, says Pennanen.

In addition to working, she also completed an MBA in management at ESCP and Purdue and an executive Master in organizational psychology and change management at the prestigious French School of Economics, INSEAD.

“My thinking was that of an engineer, putting a lot of emphasis on efficiency. I couldn’t understand how, for instance, family matters would affect how a person does their job. Then at INSEAD, they started talking about empathy and how it is important in motivating people. It opened my eyes,” says Pennanen.

At the same time, Pennanen learned about herself that she was not a corporate person, after all.

“I’m the one who challenges and brings in new ways of working. It was a bit of strange behavior at Botnia. I began to realize that such a corporation has too much politics for me.”

The last straw was when Pennanen was offered the position of her retiring boss. Yet, with a lower salary than the men in the management team. Pennanen decided to become an entrepreneur.

Courage. If you are not valued at your workplace, start your own business. Then you decide what your value is. Be bold; don’t be afraid to fail.

Value. Offer a product or a service that people are willing to pay. The product and the market must meet to make a scalable product.

Execution. Do what you intend. To succeed, surround yourself with competent people who have a passion for getting things done.

Pennanen’s first company was based in Hong Kong and mainly consulted start-up companies that were seeking funding in Asia. The company was operating on that mode only for a year before pivoting.

“I noticed that Chinese investors didn’t need middlemen; after all, they found their way into start-ups,” Pennanen notes.

She set up a couple of her start-ups, but after a quick trial, they didn’t take off. For a year, she was the CEO of a start-up developing blockchain technology for financial institutions. Although the company was in good financial condition, it did not yet have a scalable product. She was hired to help to scale.

However, in China, she met her future partner Shoham, whose background is in finance. They saw that there was a lot to digitize and make more efficient. The accelerator they set up connects start-ups to financial institutions and collects a fee when they make contracts or attract investments.

Shoham has an extensive network in Israel, which brings Israeli companies to the accelerator. Pennanen lived in Tel Aviv for a few months when the duo was still thinking about the location of the accelerator.

“The sea from which start-ups emerge in Israel is huge. There is a huge entrepreneurial spirit there. People collaborate, but at the same time, there is a competition going on, and only the strongest win”, Pennanen describes.

Maria is ranked top fintech influencer in the DACH region. She is an investor and CEO of monetizationAI, a FashionTech startup. She is an experienced manager with 20 years of in-depth experience in B2B sales and marketing within Europe and Asia where she developed a passion for learning and profitable growth. She is a qualified executive coach educated in INSEAD. She is involved in numerous German, Finnish and Israeli start-ups and invests in SAAS and Fintech startups.
This website uses cookies to improve your experience. We'll assume you're ok with this, but you can opt-out if you wish.
Accept Read More